New EP is out today! Available this week on Spotify, Apple Music, and most other popular streaming services. It’s a bit experimental so I don’t expect you too like it very much if you aren’t into both electro-funk and death metal.

What is the story behind it? 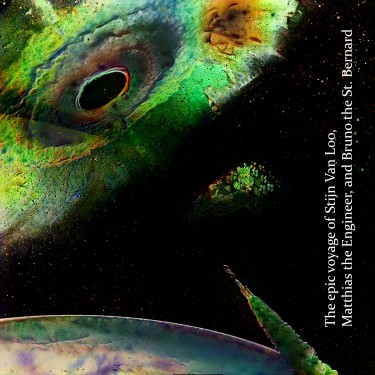 It’s a story about an inter-dimensional space-time travel of an engineer (Matthias), ametalhead (Stijn Van Loo), and a St. Bernard named Bruno.

Stijn Van Loo happens to be one of the best captains in the airforce, Matthias has proved himself as one of the most creative aerospace engineers in the world, whilst Bruno is an exceptionally smart dog.

Over the course of several years several space agencies have detected a rift ocurring near a known black hole, very far away; they determine the happening is caused by an entity, and this being’s actions are causing a dramatic expansion of the blackhole. So a multinational effort is put into play to gather funds to create the best, fastest warship ever created. Stijn and Matthias are selected from a large pool of recruits; but Matthias declines to go without Bruno, who would keep them company during the long voyage.

The battleship has the ability to create wormholes which enable bending of space-time which will allow them to reach their destination in less than a year.

They name the being Dr. Simmons, whom they presume to be an evil chemist mastermind from another race. Stijn, Matthias and Bruno shortly after set out on a voyage to destroy him and potentially collapse the blackhole by detonating fission bombs near the event horizon.

This album is dedicated to Bruno, may he rest in peace.

Listen to the album

Or watch the video for the main song

Note: The video has nothing to do with the story, and is basically just me and a good friend playing GTA V over the course of 2-3 hours. Intro scene filmed in Belgium under a bridge.