WOW! I’m impressed. This new y combinator startup has done something I dreamed up about 6 months ago. It’s an interactive activity tracker, based on users rather than on management.

ididwork.com allows anyone to keep track of their own activities, track progress, and generate reports based on that progress. Everything is tag based (as would be expected from any web2.0 y-combinator startup nowadays).

After viewing the initial video I can’t say it’s perfect. Actually I designed my own activity tracker called actablog, which is also user based, but the administration can assign activities as well. Groups can be formed per project, percentage per activity is allowed, reports are based on percentage, and well… quite a few things. 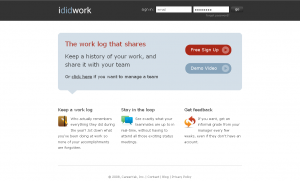 In my opinion ididwork does work well (no PUN intended), but needs a LOT more to stand out, and help users more with their activity tracking keeping it’s main function high: Being Simple. That’s one thing I admire of ididwork, it’s simple, and activity tracking is no longer a tedious task with this app.

Try it out yourself! http://www.ididwork.com (Unfortunately I see the name a bit PUNable in the future, say, one day when theres a long down-time people would be twittering that it did work.